A deep dive into the 5 Voices and the Marvel characters that define them well.

By addisonkubicek
in
Uncategorized
Oct 12, 2021 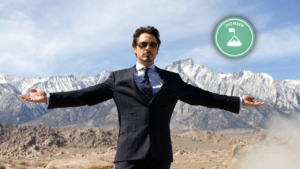 If you know the 5 Voices, you know one thing. Tony Stark is a Pioneer and there is no doubt about it. His approach to life with the “Anything is Possible!” mentality, his drive to sculpt the future he has imagined and his drive to win must have one you over from the get-go.

But it goes deeper than that. There is something else that makes Tony Stark, well, Tony Stark. Yes, his driving force is his strong performing character, as well as his drive and focus for the big picture goals, but deep down there is the drive for connection, and the futuristic vision to build and create.

Within every personality, there are three things that shape who we are at our center. Nature, Nurture, and Choice. Nature is the foundation of how we were created. Nurture is how we were raised and how that affected us, and our Choice is how the choices that we have made have affected who we are.

When we look at Nature, Tony Stark was most likely born a Pioneer. It so happens that his father, Howard Stark was also a Pioneer, whether it was his first or second voice, and Howard enabled Tony by raising him in an environment of constant growth, constant connection, and constant learning. It makes sense that the Pioneer voice would only grow stronger from there, whether healthy or not.

When we first meet Mr. Stark, we see him as the unhealthiest Pioneer. He was arrogant and he had a very “me focused” agenda. We also saw him deploy his weapons system often. For a Pioneer the weapons system is the grenade launcher. They don’t just shoot down ideas, the obliterate their target in record time. As a second voice connector there are multiple times that Tony Stark uses his powerful position to put together relationships for the future and stay connected with the people that will help him succeed.

Although Tony was a Pioneer first voice and a Connector second voice, he still was able to utilize the Connector’s Weapons System, Cyber Warfare many times over the years. Utilizing this he was able to disrupt the steadiness of the Avengers at times, as well as rally people together under a common belief especially if it was at the expense of others that considered themselves close to him, Captain America for example.

Although Tony could be a bit brash and outspoken at times, he still was the perfect leader to a great team, and he had the healthiest and most evident growth journey. For those that have seen movies in the Marvel universe, compare Tony Stark from the beginning in Iron Man, to the Tony Stark from Endgame. The growth that happened from beginning to end really exemplifies a Liberator. Part of what makes Tony’s character such a necessary piece of the Marvel universe is his growth journey. So, do you agree that Tony is a Pioneer?