Ahhh, sports. One of the most powerful forces on the planet. Don’t believe me? Just take a look at the Olympic Games–people from every corner of the earth donning their countries’ colors to cheer their athletes to victory. Sports have a way of uniting, encouraging, and teaching. As a former college and professional basketball player, I’ve learned my most valuable leadership lessons from the game. Here are 5 payoffs of sports to help you become a major league player in your professional life and beyond: 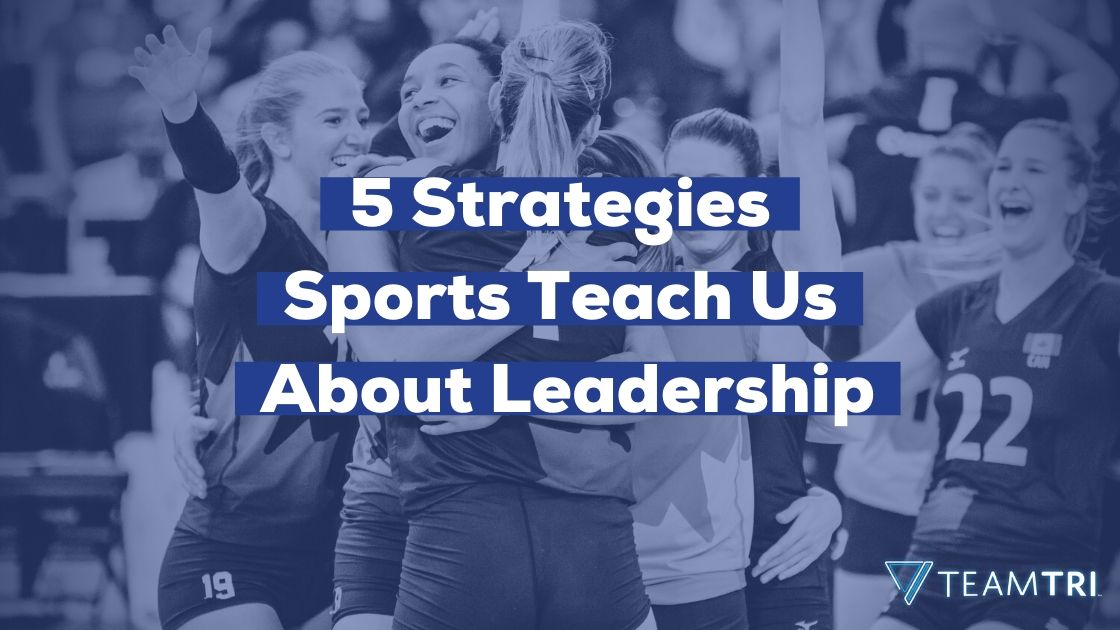 As a naïve 15-year-old, I had an important decision to make: where would I go to high school? It’s an odd question to have to ponder at 15––most of us don’t have the opportunity to choose. At the time, I didn’t know much, but what I did know what that I had my sights set on a very specific school. Oakland Catholic High School (OCHS) was my dream school, which just so happened to be the girls’ basketball powerhouse in the state of Pennsylvania. Enrolling there would mean sitting the bench for two if not three years before I started varsity. Not exactly the dream I pictured.

If I decided on my local public school, I’d start as a freshman right away. I’d be on the court every day, leading my team to victory! I had a tough decision to make. Would I sacrifice the best school to get more playing time? Or, would I risk sitting on the bench to learn more about the game? It was a decision I had trouble making.

At the end of the day though, I remembered a piece of advice my parents always gave me growing up: “to be the best, you have to surround yourself with the best.”

To be the best, you have to surround yourself with the best.

There was no denying it––the best players in the state played at OCHS. The bigger task? Actually getting in… I poured over the application and tried to showcase how my sportsmanship crafted me into a strong leader and gave me a motivation to uphold quality academics. I asked my parents and coach for help. I reviewed it over, and over, and over again. If I had ever wanted anything in life, this was it. This hard work paid off––I got accepted. More importantly, I ended up making the JV team my freshman year. Was I a starting player? Absolutely not. But was I proud of my accomplishment? Of course.

As a freshman on the team, I had some big shoes to fill. I was playing behind the best point guard in the state, which meant I needed to work twice as hard, stay late to shoot extra shots and learn from the older girls on the team. I was eager to play but knew that patience would be my best friend.

Leadership Lesson #2: Opportunity Comes in a Variety of Ways

A few weeks into our season, our all-star point guard was practicing a drill and it happened… She landed awkwardly and the next thing we knew, she had a torn ACL. She was out for the season! This was a huge blow for our team, but it was an opportunity for me. Suddenly, the starting point-guard position I had my eye on was mine for the taking. My coach knew I had been patiently working to step into this position, and believed I was ready for it. Plus, we didn’t really have much choice… The pressure was on. It was a wild introduction to high school basketball and a big leadership lesson for me, but we fared pretty well. In fact, we earned a silver medal in the Regional Championships.

Opportunity comes in a variety of ways if you are open and ready to receive it.

Leadership Lesson #3: Prove Your Worth & Don’t Back Down

We worked hard that year, and I learned more about the game, myself, leadership, and sportsmanship than I ever expected to. When the next season rolled around though, our starting point guard was healthy again, meaning there were 4 guards fighting for 3 spots. I was still the underclassman, which meant I was fearing for my spot on the team. Fortunately, I had proven my worth to my team and my coach and he decided to do something very unusual for high school basketball: start 4 guards and just one post player. With four guards leading the team, we all pushed our hardest and it paid off––we went on to win a state championship that year! With competition stiff, I was more focused on improving my game than on my playing time. I saw less playing time that year, but I was always ready to step up when I was called upon.

Lesson Learned: So what can this teach you? Stay ready, and you’ll never have to get ready! As leaders, we have to stay on top of our game. We have to stay in touch with our teams and make sure we’re fighting for the right to be there. 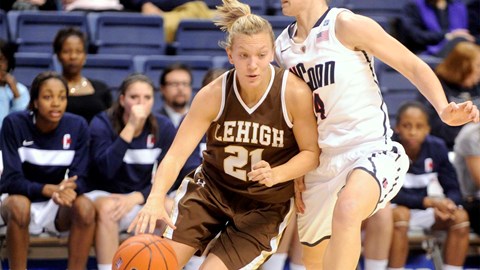 Fast forward and I moved into my college basketball career. Let’s just say, I was met with a swift reality check. I came into college having only lost about 15 games in four years in high school. I was NOT used to losing, so when I lost my first college game, it hit HARD. In fact, my freshman year at Lehigh University came with more than 15 losses… I didn’t know how to handle it, and the team didn’t either. It seemed that my teammates, and maybe even some of the coaching staff, had gotten accustomed to losing. The culture had to change!

Luckily, my classmates had also come from winning high school programs, and we knew that something had to give. We had to bring something fresh to the program, and we committed to setting an example, as a freshman, for our upperclassmen. This meant encouraging our upperclassman and starters after a game, even if we sat bench the entire game. It meant coaching each other when we noticed an opportunity to improve. It meant hyping our team up–no matter the challenge of the opponent.

We were humble enough to take direction, learn new skills, and grow our basketball IQs, but our response to losing was different than they were used to. We weren’t content with the L, we weren’t settling for the status quo, we weren’t moving on quickly. Our leadership and discomfort in losing began to spread to other teammates, and soon enough, our culture shifted. Rather than hanging out heads about the loss, we encouraged and challenged ourselves for the next victory. We took what we did wrong and pushed to improve it. We celebrated what we did right and did more of it. Quickly, our team culture turned around and people started noticing. My class graduated with two Patriot League Championships and three post-season tournament appearances.

We weren’t content with the L, we weren’t settling for the status quo, we weren’t moving on quickly.

Lesson Learned: You have the power to change the culture of your team, for better or for worse. If there is something about your team that you want to change, you are in control! You don’t need a title or position of authority. All it takes is boldness and courage to speak your mind and practice what you preach. If you are living and leading boldly, your team will take notice.

After graduating, I was given the opportunity to continue my playing career on the professional circuit overseas. My agent (yes, I had an agent… yes, it sounds fancier than it was, I promise!) found me a team in Sweden, and soon enough I was off to fulfill my lifelong dream of playing professional basketball. The first few weeks were an adjustment, but when our pre-season games rolled around, I was ready. I played well, leading my team in scoring in two of the three games.

But then, the unexpected happened. The following week, my coach called me into his office and told me that he was sending me home. I was cut. Twenty-four hours later I was on a flight back to the US. I was devastated.

I had never been cut from a team before. Not to sound dramatic, but it knocked the wind out of me. Logically, I didn’t understand – I had done everything they had asked of me and had been playing really well. Emotionally, my pride couldn’t handle the disappointment. Was I as good as I thought I was? Should I give up on this dream? Did I deserve to be on the court? Fear overtook me.

Thankfully, I had my family to comfort me and offer some perspective… The pro world is tough, but it’s not just a game, it’s not personal… it’s business. I took the time to reflect but barely had a chance to process when my agent called again. They presented me with an opportunity to join a new team, this time in Iceland. Needless to say, I was hesitant to commit. Those feelings of doubt came flooding back. I agreed, and I’m so grateful I did. It meant fulfilling my dream of playing professional basketball.

Lesson Learned: It’s not personal, it’s business. My Swedish coach matter-of-factly explained that I just wasn’t what they were looking for. Period. He was running a team, yes, but ultimately, the team was a business, and they were looking for someone different. That didn’t mean that I wasn’t talented or that I didn’t have anything valuable to offer. It just meant that I wasn’t the right fit for them. So it is in the professional world. You may apply and interview for many jobs. You may even be let go from a job. Ultimately, your professional success is not defined by where you didn’t fit; it’s defined by where you thrive! Though we will all face disappointment and rejection, we each bring something unique to the table. The goal is simply to find the right table.

Whether you wear a jersey or watch from the stands, sports can teach us invaluable lessons to carry forward into our careers. As you reflect on how to make your mark in your professional career, remember that opportunity comes in a variety of ways–you just have to be patient. As you embark on your journey, stay committed and don’t be afraid of failure. Your failures are not a reflection of your worth; find the right fit for you, and you will thrive. 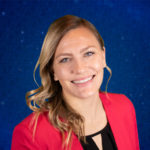